← back to
Impossible Ark Records
Get fresh music recommendations delivered to your inbox every Friday.
We've updated our Terms of Use. You can review the changes here. 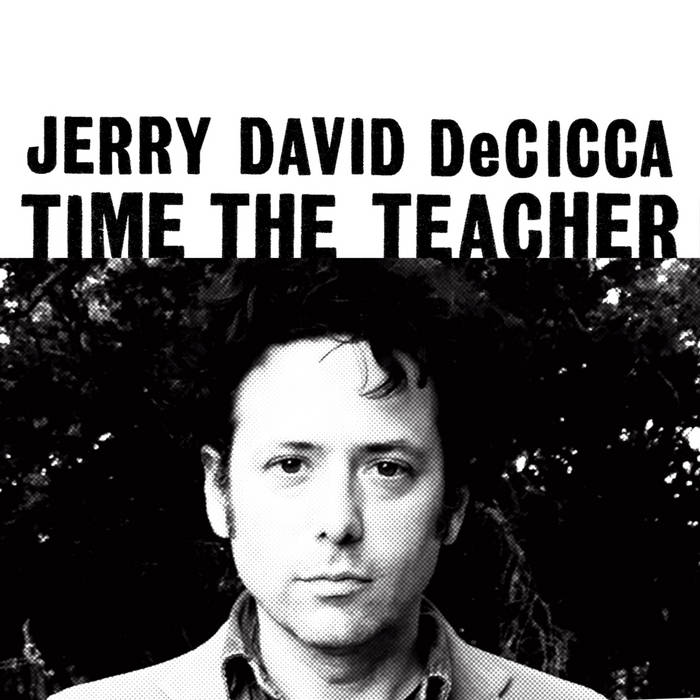 Nick Green If there was ever an album to sit quietly and listen start to finish,this is it- saxes morrisonesque Favorite track: Mustange Island.

“Jerry David DeCicca’s Time the Teacher engages with the big, timeless subjects we expect to find in poetry—love, place and the ghosts of place, loss, memory—but it’s also full of the delicious particulars of a particular life, from ‘watermelon/ pink as a sunset’ to a neon Pegasus sign. Textured with piano, horns, even some gospel choir, the songs relaxed and soulful; they pan wide in narrative mode but also come in for the lyric close-up. What strikes me most about Time the Teacher is how dialed in DeCicca is to pleasure, and how that pleasure translates to the listener. This album feels true. I believe, again and again, every word.”


Jerry David DeCicca’s second solo album, Time the Teacher, resides in the Texas Hill Country where dance halls and cedar post fences are as naturally occurring as a river or a cavern. But the fiddles and acoustic guitars of this terrain’s Godfathers, like Jerry Jeff Walker and Townes Van Zandt, has been replaced by saxophones, piano, trumpet, and soulful backing singers.

Produced by Jeb Loy Nichols and Benedic Lamdin (Nostalgia 77) in London, DeCicca recorded his vocals with Stuart Sikes (Cat Power, White Stripes) in Austin, Texas between bites of BBQ. Nichols met DeCicca when he was a 20 year old working in a used record store in Ohio, while touring his Lover’s Knot album. Years later, in 2007, they collaborated on producing the final recordings of Larry Jon Wilson. Time the Teacher is the hymn and highlight of their 20 year friendship.

DeCicca is the former leader of The Black Swans. His 2014 solo debut, Understanding Land, was a collection of home recordings featuring Will Oldam, Kelley Deal, and Spooner Oldham. He is also the producer of outsider songwriter albums by Ed Askew (Tin Angel), Chris Gantry (Drag City), and Will Beeley (Tompkins Square). He works in social services and lives in the rural town of Bulverde, Texas.

A few years ago, I moved to Texas with someone I love to a town where we knew no one. We brought two cats with us, Claude and Cherry, and adopted a kitten we found in a junk store on our first day here. We named her Squirrel. I started banging around the backroads of the Hill Country in my minivan, floating the river, and haunting the honky tonks and dance halls. In the first month, I saw Jerry Jeff Walker, Willis Alan Ramsey, and Joe Ely. I spent a lot of evenings on the porch watching the geckos hunt for bugs as they crawled along the jasmine. I threw my apple cores to the deer that liked to sleep in our front yard. Even though I was spending more time alone, I felt less lonely than ever before. I wrote these songs on an acoustic guitar the first year we lived here. Then I sent them to my friend, Jeb, in Wales. I told him the songs were about my life in Texas, but I didn’t want to make a record that sounded like Texas. He knew what I meant and took over. A piano player in London, Matthew Bourne, translated my chords and picking into language. Then I sang over his notes up the road in Austin. When the record was finished and returned, it was filled with gospel goddesses and horns from the heavens and I couldn’t love it more.
Time the Teacher—For my first job here, I taught mental health awareness classes to middle school and high school teachers. I drove between San Marcos, Wimberley, Kerrville, New Braunfels and Blanco. The hills and rivers and rocks I passed looked new each time I saw them. One night, alone in a hotel room with my guitar, I wrote this song.
Watermelon—I suppose in the world of songs about fruits and vegetables, there’s already been more written about watermelon than anything else. But I’ll tell you what, no one wants to hear the one I wrote about jicama.
Lazy River—The tourists eventually leave and then the rain cleans the rivers of all the toxins and garbage they left in it. This is the best time to take a float or just watch the rivers’ calm recover and return.
Grandma’s Tattoo—When I see an older person, I think about all the life they’ve seen, the sadness and joy they’ve lived through, and the secrets they’ll soon take with them. I saw this song’s grandma in a laundromat with fresh ink and I asked, “Did that hurt?”
Kiss A Love Goodbye—I found an old letter in a box during the move that I thought I had lost 20 years ago. I wrote her back hundreds of times in my mind.
Mustang Island—I’ve always loved beach music: Doug Clark & the Hot Nuts, Southside Johnny, Clifford Curry. But this isn’t that kind of beach music. Written on a Gulf Shore beach that sits between Port Aransas and North Padre Island, this one is for the mole crabs, not the bikinis.
Walls of My Heart—I didn’t really paint things on my heart, but I sort of did.
Woodpecker—Eve and I spent my first Texas birthday in Bastrop State Park. Three years earlier, the worst wildfire in the state’s history burned through the county, leaving the park scorched in some parts, untouched in others. As dusk set on our camp, I heard a woodpecker across from us, deep in the barren side. I listened to him as I wrote this song in almost the time it takes to sing it.
I Didn’t Go Outside Today—Some days, not entering the world is the best policy.
The Other Side—The grass isn’t always greener and sometimes there’s no grass at all, but we all gotta try.

I’d like to thank Jeb and Benedic for making this album what it is. It’s theirs as much as it is mine. Thank you to all the beautiful players and singers, whom I’ve never met (except for Andy). I consider you all friends.
Thanks to Stuart Sikes and Stuart Sullivan for working with me in Texas. Thank you to Don Cento, James and Leah Toth, Chris Forbes, Canaan Faulkner, Adam Busch, and Adam Smith.
Thank you to Eve Searls for the photos, vocal coaching, and endless love.
All songs written by Jerry David DeCicca (c. 2016, Understanding Land Music/ ASCAP)
Produced by Jeb Loy Nichols and Benedic Lambin
JDD vocals recorded by Stuart Sikes, mixed by Stuart Sullivan.
JDD vocals produced by Eve Searls.
Mastered by Adam Boose at Cauliflower Audio.
Lacquer Mastering by Adam Smith at Audiomatic.